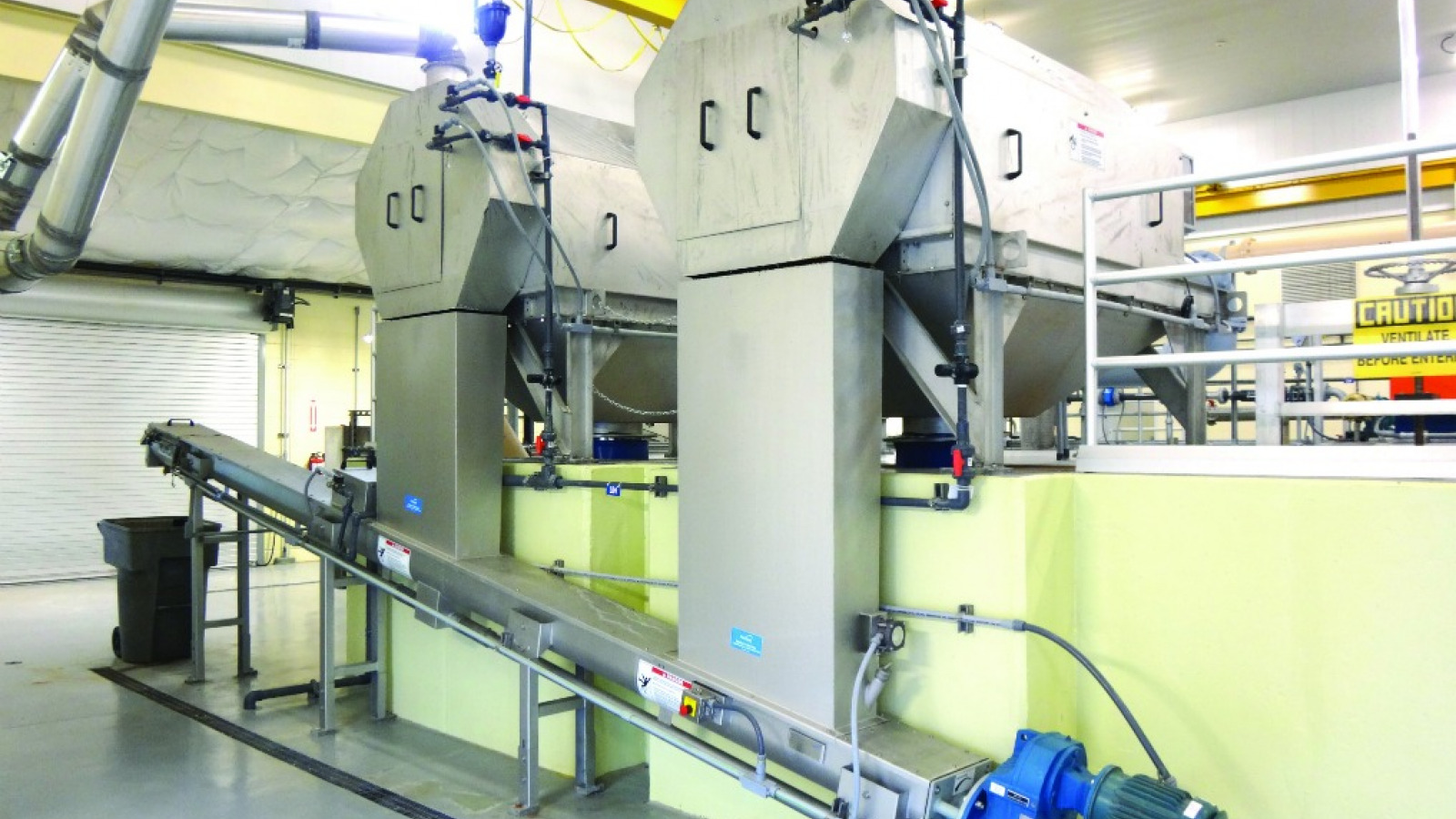 The Del Monte plant in Kingsburg, California is a fruit and vegetable processor whose principal product is canned peaches. The peach processing lines operate only two months a year when the fruit is at its peak. During that short processing season, the plant operates around the clock, 24 hours a day, 7 days a week. Typically, the plant processes 70 tons of peaches an hour and generates about 1 MGD of wastewater. There is no time for unscheduled slowdowns or surprise shutdowns.

The plant generates large amounts of wastewater with high BOD and solids discharge. Del Monte strives to remove as much of the solids as possible.

Del Monte had been using three 6' wide static screens with .020" openings. The wastewater from the peach lye peeling operation has a high pH, which promotes the growth of mold that can blind the screen openings. The parabolic-shaped screens with their hard-to-reach crevices required constant attention to prevent blinding.

The problem was so serious that a worker was stationed there to continuously clean the screens, and even this was not totally effective. The screens still blinded. Water gushed everywhere, even into the solids holding tower where screened solids are stored before they’re hauled away to a rancher for animal feed. Because these solids are extremely wet, they are difficult to handle. The trucker complained that he could not haul the wet loads in his open containers without spilling onto the highway. Hauling costs were high since the loads were heavy with water. The rancher was not happy either and claimed the wet solids diluted his other animal feed. At one point, the plant was in danger of losing the contracts with the trucker and rancher.

Del Monte selected the Rotoshear® unit for several reasons. First, the screen is automatic and would not require an attendant. Second, they felt Parkson was a name they could trust. They had another Parkson screen, a Rotostrainer® wedgewire screen, installed in the peeling line. In addition, they had a good relationship with the Parkson representative who serviced them well and understood their process. His expertise helped them in previous situations. All this, and the Rotoshear® was competitively priced. 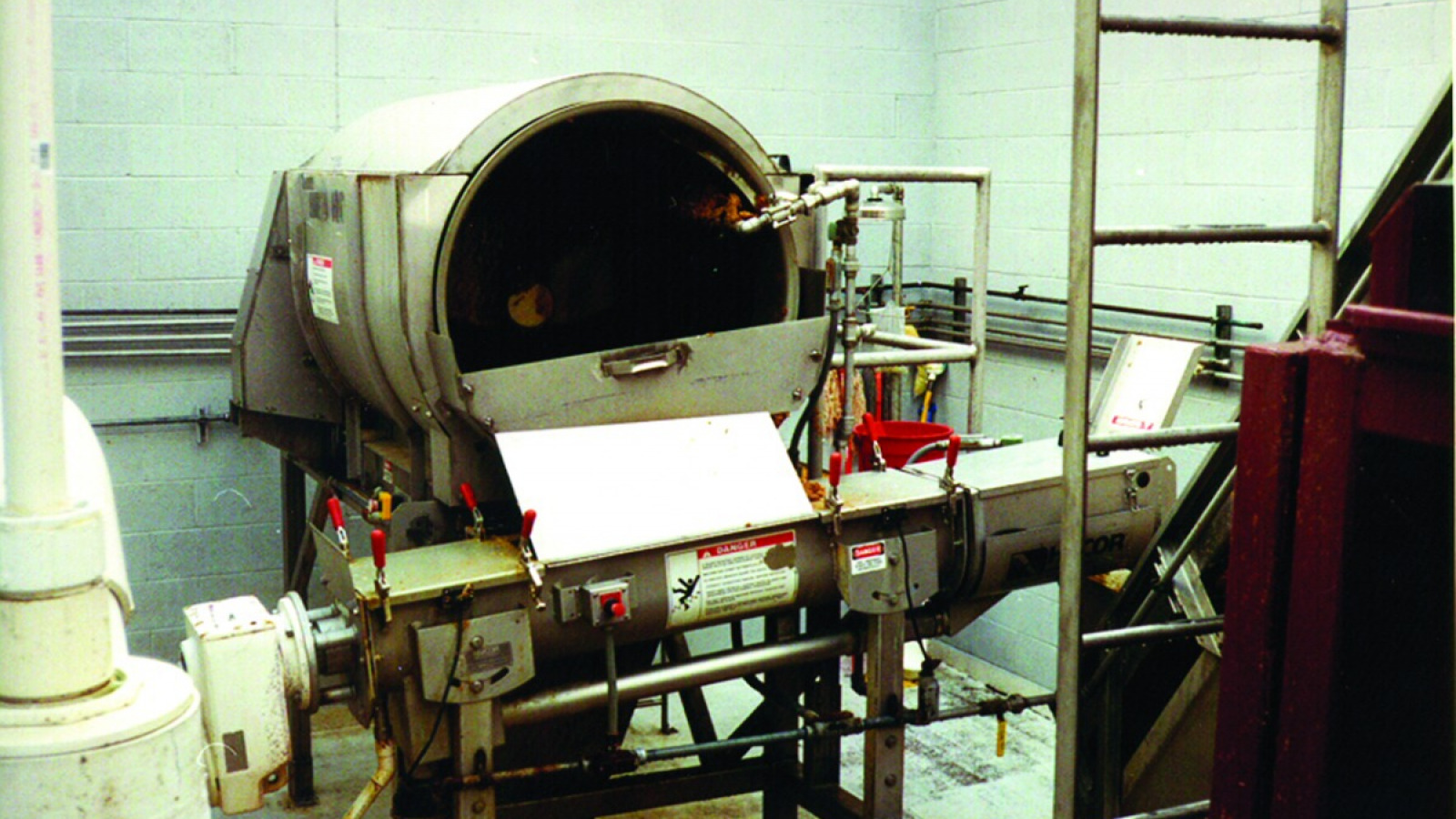 The Rotoshear® unit replaced all the static screens except one that is kept as a standby unit in the event of overflow. The Rotoshear® went into operation last season and successfully handled the entire waste flow.

The waste stream is first coarse screened prior to entering a sump area. The sump has two pumps with variable frequency drives that are staged and controlled by a sump level sensor to regulate the flow into the screen. Generally, feed rate into the screen is approximately 500 GPM. However, when the main peach flume is dumped throughout the day, the screen handles flow rates up to 2,000 GPM.

Since mold is a major concern, Del Monte added their own internal and external spray system to the screen. It is a 1,000 psi PLCcontrolled wash system that is already employed in the plant. The system uses very little water and operates for one minute, three times an hour, which is sufficient to keep the mold under control.

Del Monte is quite pleased with the Parkson screen. Screenings are consistently dry. The trucker is happy and the rancher now considers the solids to be valuable animal feed. Costs for hauling are significantly reduced and POTW charges have not increased. The worker who had to manually clean the static screens is now back on the production line.

The plant is now better focused on the business of canning peaches without the distractions of wastewater screening problems. Based on the excellent performance at the Kingsburg plant, a second unit was purchased for the Del Monte fruit cocktail processing facility in San Jose.